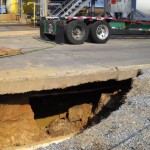 made or natural, are not uncommon in Georgia.  Sinkholes form when cavities form under the ground surface and subsequently collapse.  The collapsed soils progress up to the ground surface where a sinkhole may develop over time or catastrophically without warning.   Sinkholes develop in some of the most undesirable locations.

A sinkhole developed under a chemical tank farm giving no indications of what lurked under the pavement until employees noticed soil disappearing at the pavement edge.  What started as a small 3-foot diameter hole developed into the cavity shown in a matter of a couple days.  Geo-Hydro cored the existing concrete pavement and performed soil borings to delineate the cavity and estimate the volume.  The void extended up to 30 feet horizontally and 12 feet vertically under the existing tank farm and product unloading station with no indications on the existing pavement of the pending potential catastrophe.  Geo-Hydro provided several options for remediation.  The owner determined the most prudent would be to immediately pump grout under the existing paving to fill the cavity with a final volume of 500 cubic yards.

Insurance providers often require a knowledgeable third party to evaluate, determine cause, and provide remediation recommendations for sinkholes.  Geo-Hydro is the name to remember if you find yourself in this unsettling situation.